As the winner of the war for the successor of DVD, Blu-ray can provide extremely HD video effect. With higher compression ratio and advanced HD encoding technology, Blu-ray is more and more popular among the modern society. You can now play a Blu-ray on your computer with a Blu-Ray Disc™ drive and a Blu-ray player, but how to play a Blu-ray on your iPad, iPhone, iTouch?

iPad, as the leader of tablet computers, got lots of fans around the world. Supporting up to 1080p video, you can enjoy your HD movies on iPad comfortably. But it is a pity that you can’t enjoy your Blu-ray movies on iPad because of no Blu-Ray Disc™ drive with your device. With the release of Mac Blu-ray player which can first play Blu-ray on both Mac and windows, this problem be solved. The version 2.0 is built-in with an “AirX” option, with which users can enjoy their Blu-ray on an iPad conveniently.

How to play Blu-ray on iPad on the Go without Changing Free Space?

Step 1 First free download Mac Blu-ray Player, install and run it on your computer. Both Mac and windows version are available here, make sure you choose the appropriate one.

Step 2 Before inserting Blu-Ray Disc™ or playing local movies, you should first enable the “AirX” option under the “Tools” menu. 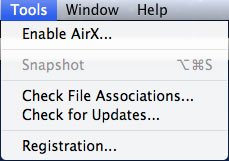 Note: The tool can play any Blu-ray, including all possible Blu-ray sources like Blu-Ray Disc™, and decrypt any Blu-ray encryptions, such as AACS and BD+ (for legal use only).

Step 3 Click on “Open File” or “Open Disc” button to load the Blu-ray, when the loading is finished the screen will go black and then you can get the website URL “http://airx.tv “. 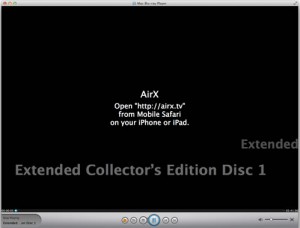 Step 4 First you should make sure that your iPad is connected with your computer via WiFi. Open an internet explorer in your iPad and then copy and paste the website URL in Step 3 into it. Then the loaded Blu-ray source will be listed, you can enjoy Blu-ray movies on your iPad.

Note: If you want to enjoy Blu-ray on your iPhone, iTouch, you can also refer to the way of playing Blu-ray on iPad.

16 thoughts on “How to Play Blu-ray on iPad directly?”